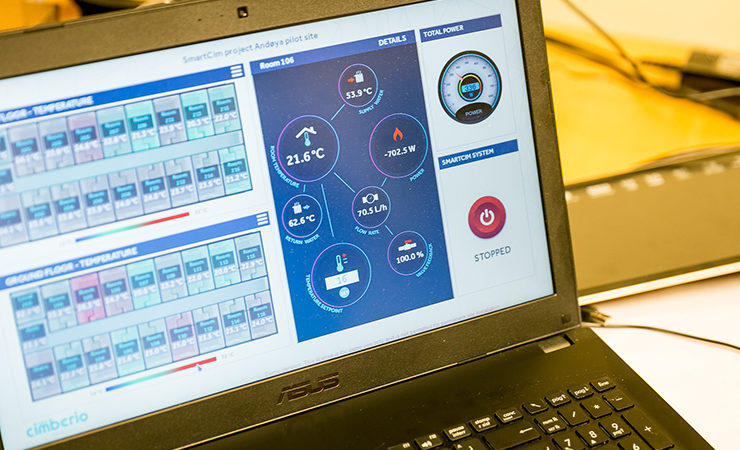 SmartCim is the new system to automatically monitor and balance HVAC systems and its development has been completed with success, meeting all the project objectives. The whole project has been crafted in San Maurizio d’Opaglio, headquarter of the company, in the famous Italian HVAC district.
SmartCim core components have been designed using the most advanced solid modeling software and thanks to the innovative 3D prototyping systems, Cimberio’s engineers have been able to test and review very rapidly all the technical and aesthetic-dimensional aspect of the project, an effort that has brought 7 new patents.
The partnership with Enersem, a Politecnico di Milano spin-off company, and mnubo, a Canadian company, leader in data analysis techniques, have allowed to define complex mathematical models based on the bigdata generated by the SmartCim system. These information have allowed the development of new optimization strategies and predictive maintenance algorithms that predict malfunctioning before these actually happen.
The European Union have invested in the project through the Horizon 2020 program and EU officials have appreciated the SmartCim potential in energy savings and its very limited physical footprint. This feature, coupled with the wireless communication between the devices, allow an easy deployment even in buildings where space is limited or with architectural or monumental constraints.
The innovation level reached by SmartCim produces great energy savings as demonstrated by the pilot installation at the Andöya Space Center in Norway. After a whole year, data analysis show a 27% average energy saving with 70% saving peaks.
Cimberio’s intuition has been realized: the HVAC future is here.